China plans to accomplish a 200-tonne megawatt-level space-based solar power station by 2035, according to the China Academy of Space Technology (CAST).

The space-based solar power station would capture the sun's energy that never makes it to the planet, said Wang Li, a CAST research fellow with the program, when attending the sixth China-Russia Engineering Forum held last week in Xiamen, southeast China's Fujian Province.

The energy is converted to microwaves or lasers and then beamed wirelessly back to the Earth's surface for human consumption, Wang said.

"We hope to strengthen international cooperation and make scientific and technological breakthroughs so that humankind can achieve the dream of limitless clean energy at an early date," Wang said.

Compared with traditional fossil energy, which has been increasingly exhausted and is responsible for severe environmental issues, space-based solar power is more efficient and sustainable, providing a reliable power supply solution for satellites and disaster-hit areas or isolated areas on the Earth, Wang said.

The concept of collecting solar power in space was popularized by science fiction author Isaac Asimov in 1941. In 1968, Peter Glaser, an American aerospace engineer, wrote a formal proposal for a solar-based system in space.

China has proposed various sunlight collecting solutions and made a number of major breakthroughs in wireless energy transmission since the country listed space-based solar power as a key research program in 2008.

However, ambition has long been a challenge for current technology because it involves the launch and installation of numerous solar panel modules and the efficient wireless transmission of mega energy.

With an investment of 200 million yuan (28.4 million U.S. dollars), China is building a testing base in Bishan, southwest China's Chongqing Municipality, for the research of high-power wireless energy transmission and its impact on the environment.

Researches in this field will spur the country's space science and innovation in emerging industries like commercial space transportations, Wang said. 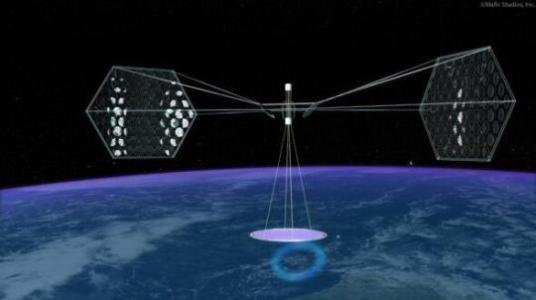